Students learn that until the nineteenth century, ocean floors were considered flat, featureless plains. Early attempts to map the ocean floors used soundings taken with weighted lines from ships. This method was slow and inaccurate. In 1855, U.S. Navy lieutenant Matthew Maury published a bathymetric chart, which indicated that an underwater mountain existed in the middle of the Atlantic Ocean. Soon after that, narrow strips of the sea floor were surveyed during the laying of the first trans-Atlantic telegraph cables. Mapping the ocean floor accelerated after World War I. The German Navy began to use early sonar systems to make maps that their U-boats (submarines) could use to navigate. 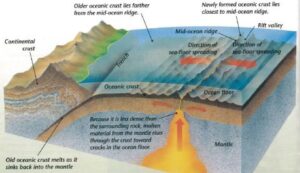